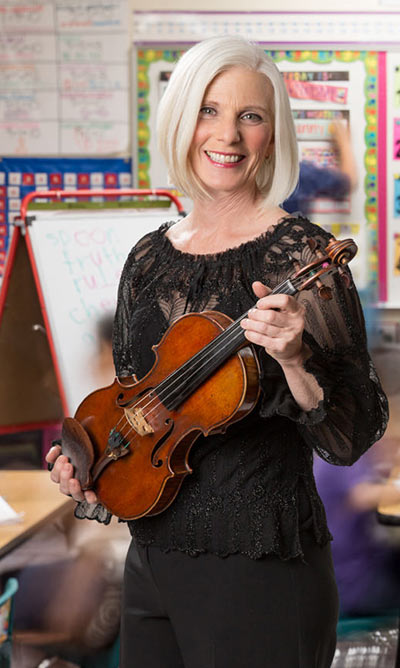 Cheryl Bintz, a member of the second violin section of The Phoenix Symphony, grew up near Detroit Michigan and was introduced to the violin at age 10 through a school music program. She received her bachelor's and master's degrees in music from Indiana University, where she studied with James Buswell, Gregory Fulkerson and Rostislav Dubinsky. While attending the university, she performed in the symphony orchestras, opera, and as principal second of the chamber orchestra.

Prior to joining The Phoenix Symphony in 1983, Cheryl played with the Michigan Opera Theater as assistant concertmaster, the Michigan Chamber Orchestra, and freelanced in the Detroit area. Additionally, she studied and performed at summer festivals such as the Spoleto Festival dei due Mondi, Tanglewood and the Lake George Opera Festival.

During the summers, Cheryl performs with the Chautauqua Symphony Orchestra in New York where she has been a member since 1990.

In her free time, she enjoys cooking, needlework, in-line skating and yoga. She also volunteers at the Family Arts Needlework Shop, a non-profit organization aiding women and children.