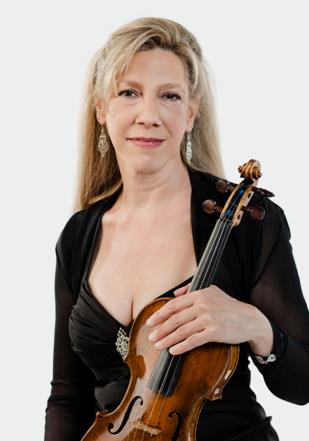 Magdalena Martinic-Jercic, Associate Concertmaster of the Phoenix Symphony, was born in Burlington, VT, and began playing the violin at age 6. Music played an important role in her life; her father, a radiologist, played piano and cello, and her mother was a professional flutist as well as a professor of Italian.

Martinic-Jercic attended the North Carolina School of the Arts and the University of Michigan where she received her Bachelors and Masters degrees in violin performance., under the tutelage of Paul Makanowitzky and Ruggiero Ricci. Her other teachers included Ivan Galamian and Shmuel Ashkenasi. After graduating, she performed with the Vera Cruz symphony in Mexico for 6 months before attending the Eastman School of Music in New York. At Eastman, as a result of winning the International Cleveland Quartet Competition, she served as assistant to Donald Weilerstein, and participated in a two year Quartet Program, earning a Performer´s Certificate. During that time, as first violinist of the Casella Quartet she won first prize in the Fischoff International Quartet Competition, participated in the Munich Quartet Competition, and the Quartet had their Carnegie Debut.

Before joining the Phoenix Symphony in 1988, she performed extensively as a recitalist and chamber musician, throughout Europe, Japan, Mexico and the US, and also toured with the Orpheus Chamber Orchestra of New York, and the Mantovani Orchestra. Aside from her position as Associate Concertmaster of the Phoenix Symphony, she has enjoyed her summers performing with the Santa Fe Opera Orchestra since 1984.

Outside of her rich musical life, Maggie is an avid runner (6 Marathons and counting) and treasures time spent with her family and dogs.