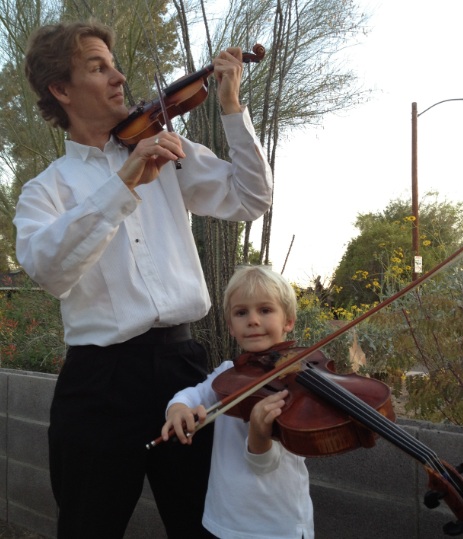 Mark Dix has been a Phoenix Symphony member, active chamber musician and private teacher in the Valley since 1995. Born in Colorado Springs, he began studying the violin at age six.  His older brother played as well and his parents loved classical music, although neither parent played an instrument. In middle school Mark became interested in the deeper toned intstruments and began playing the viola as well.  By college the viola was his chosen instrument, obtaining his Bachelor’s degree from the University of Puget Sound in Washington, but he still performed on violin as well.  A career in orchestral performance became Mark's goal, earning his Master’s at the Manhattan School of Music in NYC, where his primary teacher was Cynthia Phelps. He performed in festivals in Germany, the US, and his favorite, Spoleto Italy, where he spent six summers.  After winning a position with The Phoenix Symphony, Mark sunk roots downtown restoring a 1919 house (a slow labor of love, still not finished!).  The vibrant visual arts scene our city, and the influence of his artist father and brother, inspired him to develop The Downtown Chamber Series in 2000, which features chamber music in urban art spaces. Music education has always been a passion of Mark's as well, and he creates the programs and moderates for The Phoenix Symphony String Ensemble Classroom Concerts, which visit many schools throughout the Valley. Mark has two children in grade school, one plays violin and the drums, the other piano.