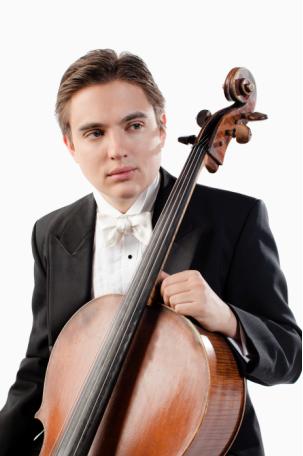 Peter Lorenzo Anderegg joined the Phoenix Symphony in 2007 and became Principal Cellist in 2010.  Before joining TPS, he performed orchestral and chamber music with a variety of ensembles in the premier venues of the world, from Carnegie Hall, Disney Hall, and the Kennedy Center in the US to the Sydney Opera House and the BBC Proms at Royal Albert Hall. He was a member of the Springfield (MA) Symphony and the UBS Verbier Festival Orchestra, as well as performing frequently with the Boston-based Arcturus Chamber Ensemble and several ensembles and organizations in New York, including Ten O'Clock Classics, The Knights, the Juilliard Chamber Orchestra, and the avant-garde New York Cello Fury. His festival appearances include the Greenwood, Tanglewood, Aspen, Lucerne, and Verbier Festivals and he is currently a member of the Colorado Music Festival in Boulder.

Born in Boston, MA, Peter Lorenzo began cello studies at the age of 4. He frequently performed with his twin sister Francesca, a violinist, and his father David, a pianist, as the Anderegg trio. His early studies were with Mark Churchill at New England Conservatory, where he performed on the pilot of the NPR program "From the Top" and was a member of the award-winning NEC Youth Philharmonic Orchestra. While completing a B.A. cum laude in Mathematics at Harvard University, he appeared as a frequent soloist with the Harvard-Radcliffe Orchestra and Bach Society Orchestra, and was a member of Phi Beta Kappa and a teaching assistant in the Mathematics Department. He received a M.M. degree from The Juilliard School, and his other major teachers include Darrett Adkins, Joel Krosnick, Michael Reynolds, Lynn Harrell, Norman Fischer and Yehuda Hanani.

In addition to the Symphony, Mr. Anderegg can be heard performing on Phoenix's Downtown Chamber Series and in other recital and chamber appearances across the Valley of the Sun. He maintains a private teaching studio and is a member of the AFM Local 586 - Professional Musicians of Arizona. In his free time, he enjoys volunteer work, hiking, playing Ultimate Frisbee and cooking vegetarian and Italian meals with his fiancée.